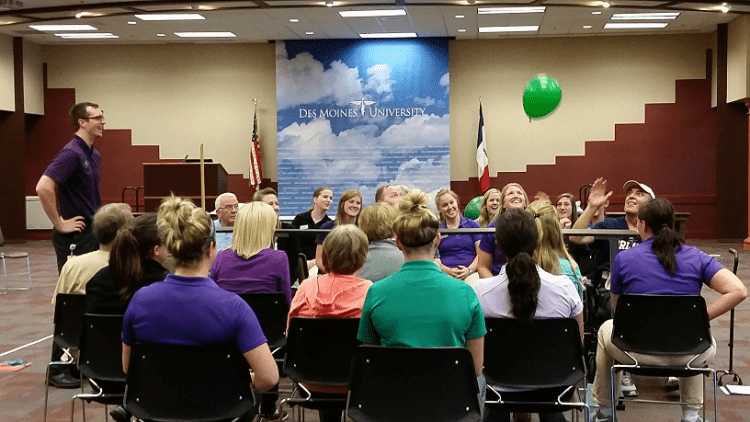 Stroke survivors likely never describe their recovery process as fun and games. Therapy can be grueling and gains incremental. Yet the laughter among Des Moines University Stroke Camp participants as they bat a green balloon during a modified game of volleyball make it clear the University’s physical therapy department has figured out how to put the ‘fun’ in improving patient function.

Stroke survivors can continue to make progress years after the stroke. This camp allows them a time for additional intense therapy for improved function. Seven “campers,” individuals who have survived cardiac events/strokes, work for five days with teams of third-year physical therapy students and licensed clinicians. Campers, students and supervising clinicians all volunteer their time to learn from each other and develop new skills.

“I want to be with neuro patients [after graduating],” says Jenna Wexter, D.P.T. ’16, one of 16 DMU students who give up a week of vacation to participate in the camp. “It’s different from clinicals; in this setting, we feel like we can think outside the box.”

The Stroke Camp concept came to campus as a result of DMU global health service trips to Jamaica and relationships with clinicians there who host a similar camp. Kathy Mercuris, P.T., D.H.S., has coordinated the camp at DMU since 2011, recruiting participants, developing the syllabus and schedule, and coaching students and campers as they work through daily exercises.

“The camp is a win-win-win,” Mercuris says. “The patient volunteers improve their skills and are provided with a new home exercise program. The students win through honing their physical therapy skills and learning more about the challenges and triumphs following a stroke. I win through offering a service to these deserving stroke survivors and seeing firsthand how far our students have come on their journey to becoming physical therapists. It is an awesome and humbling experience.”

Each day of Stroke Camp blends traditional therapy (an hour each of walking, balance and arm exercise) with group exercises such as Pilates and tai chi and games modified to the campers’ abilities. Circle discussions (sans campfire) also encourage campers to open up and share personal stories about their struggles and perseverance toward recovery. Camaraderie develops between everyone that participates which goes far beyond improved function.

“It’s quality therapy, quality time here,” says Kevin Klisares, whose stroke while turkey hunting left him not only with a disability, but divorced and devastated. “It’s been a long road and it takes forever and it’s frustrating, but the DMU students give you hope and encouragement. We [campers] feel like we’re helping the students be better at what they want to do, which is why I’m here.”

The involvement of experienced clinicians is also essential to the camp’s success and benefits for students.

“Yesterday, I was working with [camper] Sandy on getting up from the floor, and Dr. Mercuris said ‘I want you to break each movement down and work on the components,’” Maggi Schutte, D.P.T.’16, says. “So we spent 30 minutes hanging out at half-knee. It was a good reminder that spending time in awkward positions is so important for developing balance and building strength, rather than always doing functional motion.”

Jen Sitter, D.P.T. ’15, took a vacation day from her work at Central Iowa Physio in Marshalltown to advise students. “I learned a lot from being at DMU, and it’s something I can do to give back,” she says. “This is an opportunity I wanted as a student, and it’s a patient population I really enjoy. They’re so motivated, and you can actually help them do things most people take for granted.”

“Motivated” is only one word to describe the campers who participate in DMU Stroke Camp. On the closing day, they gathered around and provided each other with words of affirmation: Fighter. Strong. Determined. Jokester. Caring.

The campers left the experience, not only with post-test scores on their abilities and home exercises to work on with their spouses/caretakers, but also with a sense of accomplishment and camaraderie with the students.

“To me, what they do is awesome,” says Guy ‘Spike’ Westemeyer, who has suffered two strokes since May of 2014. “It takes a special person to be a physical therapist and have it in their heart.”